Yep, I said it, it’s OK to ditch your coffee maker and still get your caffeine fix. This isn’t some stealth ad for Starbucks, either. I’m gonna show you how to free up your counter and make really tasty coffee with stuff you probably already have in your kitchen, because the truth is you really don’t need a coffee maker.

Now, if you are one of those people who invested in like, a super fancy espresso machine or something, don’t feel bad. You earned that espresso machine, so rock on with your bad self. This post is designed more for people who feel burdened by their coffee maker, rather than delighted by it.

Still, this is gonna be a weird one, and I might lose some of you. That’s ok, zero from zero is still zero.

We’ve been doing some stuff in the kitchen, by which I mean I’ve been staring at it critically and worrying my husband. I’ve also reorganized a lot of things, gotten rid of stuff, and have been exploring cabinet refacing amongst other things. More on that later.

One of the things that came up was our microwave. Our ancient, rarely used microwave. I’ve recently been using it to melt butter, which explodes, and then makes the whole kitchen smell like movie theater popcorn. Not necessarily a bad thing, but kind of a waste of … everything.

So, while cleaning it out, I was thinking how much space it takes up on our countertop. And boy, it really does.

This was what the kitchen looked like when we moved in. Things have changed, but not enough.

I’ve spent so many hours of my life figuring out where to put it and what to do with it. I elected to stick it in the corner next to the sink, and use it to hold up a variety of baggies, cling film, and wax paper.

In the context of making some updates to the space, I mentioned wanting to get a smaller microwave that would fit in the corner a bit better. The idea of getting rid of the microwave altogether hadn’t even crossed my mind. Why am I telling you about this? How does it relate to making coffee? You should know by now that I never get straight to the point. This is my website, god damn it.

Inevitably, though, the thought did cross my mind, and our microwave is now sitting in our second bedroom. Now, it’s worth mentioning here that while the pic above represents what our house looked like at move in, we have a lot more crap cluttering up the space. 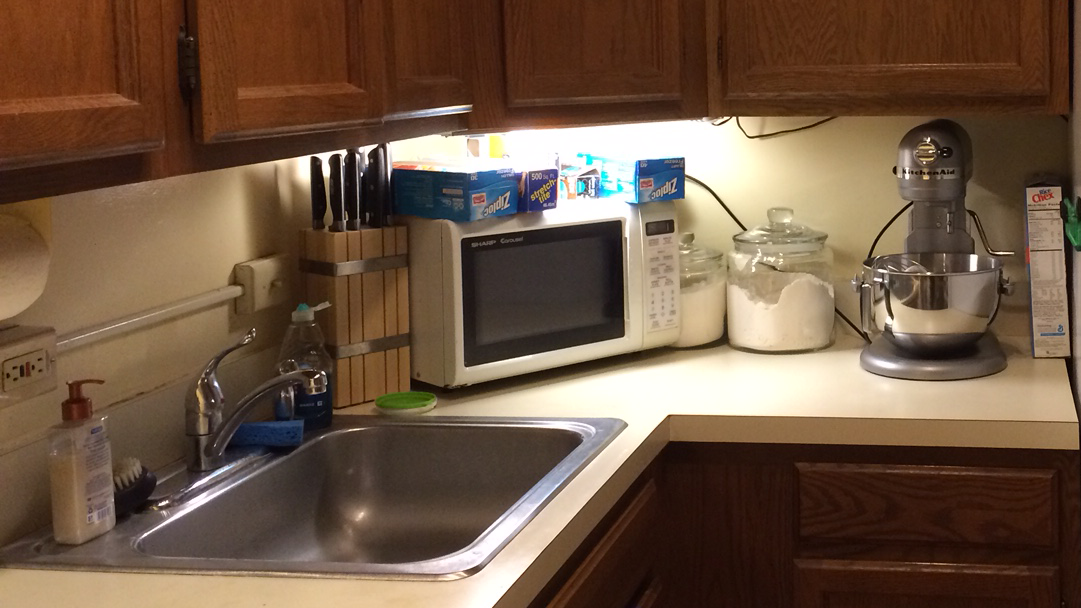 This is my kitchen. There are many like it, but this one is mine.

So yeah, you see that weirdly small drawer that doesn’t span the full amount of available space across? Yes, that is one of two drawers in my kitchen, and the largest by far. It is insufficient for holding things like knives. So knife block is a thing out of sheer fucking necessity.

I also have a stand mixer because fuck you, it’s great. Not pictured, the coffee maker now takes up a lot of space next to the stove. Oh wait, here, here’s a picture for you.

So an already small space is made even smaller by having shit on the counter. I vowed for a while not to be that person who just has a shitload of appliances out all the time. But come on – the microwave, ok, we can make a case for that if it isn’t used often. But the coffee maker?! I use that every day, sometimes multiple times a day. And this one is great: I have the carafe and the individual option, I have a timer, it’s awesome.

Except it takes up a lot of space. And it’s really hard to clean. It also has a lot of plastic parts which are kind of dubious when mixing with very hot water.

I’m not the kind of person who can do a french press. It’s not my style, and it’s kind of like Dave Matthews – I like the guy, I like his music, but the fans are just ridiculous. I can’t throw in with that lot.

I needed something versatile, something that wouldn’t be another thing to take up space in my kitchen, something simple and easy to use, something easy to clean.

And then I realized – I already have everything I need to make a great cup of coffee without a coffee maker. Here’s how. 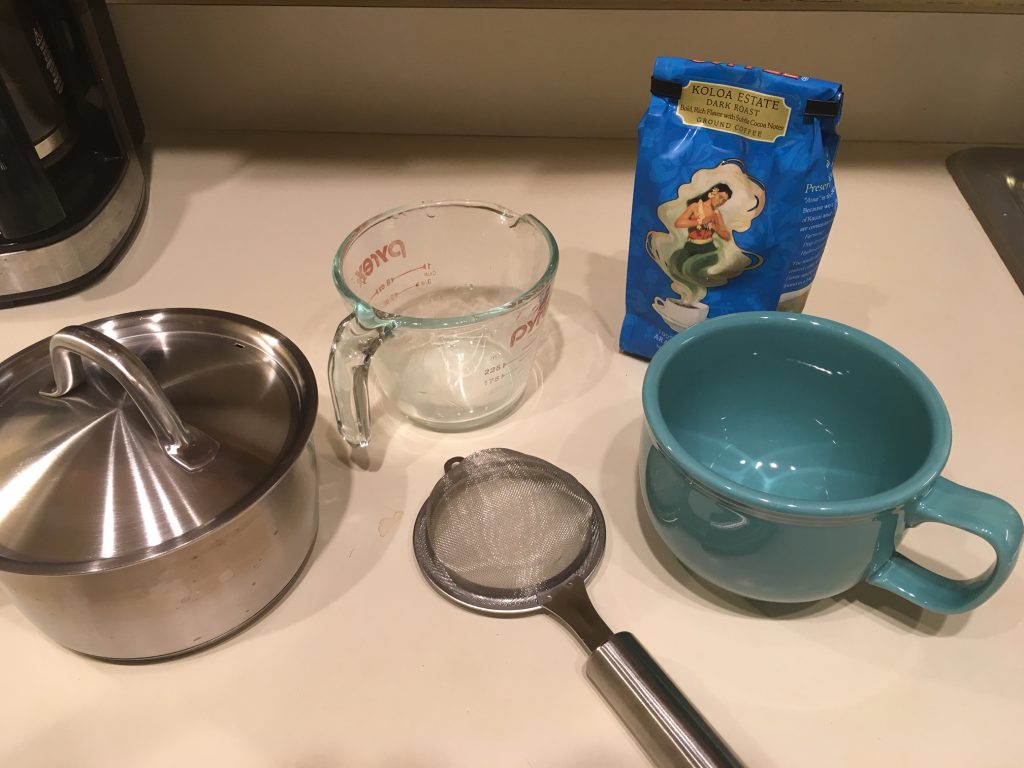 Probably the only thing you might not have on hand is the fine mesh strainer, which is one of those super handy things to have around for any number of reasons, this being merely one of them.

Truly, all you need is a liquid measuring cup, coffee (duh), and a saucepan. I use a teeny tiny one for a single cup of coffee, but the great thing about this is if you’re making coffee for a crowd, you can just size up the pot for the number of people you’re serving.

Now, yes, you’re right – there’s a bit more time involved. But if you have a big group of people over, and you make a carafe of coffee, you know that takes time to brew as well.

Making Coffee on the Stove

That’s it. And it’s dead simple to clean. Everything is dishwasher safe, but a quick rinse with a bit of dish soap will get the mesh strainer good as new in no time.

I can’t get over how easy to clean this is. The fine mesh strainer is perfect for this purpose. I don’t need to contend with a shit load of grounds, because most of them are at the bottom of the saucepan, anyway, so I’m just catching the sneaky ones that get through. Quick tap over the trashcan and a rinse and you’re done.

No more vinegar, no more parts to carefully clean and scrub, no trying to figure out how to get coffee stains off of glass. The stainless steel is perfect for this, and if it does stain, bar keeper’s friend works a treat on it.

And look, this isn’t gonna work for everyone. There are definitely down sides – it’s a little bit more work up front, you can’t really do it ahead (though in theory, if you have an electric kettle, you could come pretty darn close – you’d just need to let the grounds brew for 5 minutes).

The point is that you don’t need a coffee maker to make coffee. And of course, it’s one of those things that when you think about it, it’s obvious. People have been drinking coffee for way longer than coffee makers have been around. But for a lot of us who haven’t experienced life before coffee makers, it sometimes takes a clue-by-four to get the memo.

So there you go. If you want to try this and stop cleaning your fucking countertop hog, don’t want to buy coffee filters, and want a better tasting cup of coffee, this might be the solution for you.

More in this series (that’s right, it’s a series now):