I’m gonna come right out and say it: no renovation project is quite as invasive as refinishing wood floors. Refinishing parquet floors adds an extra wrinkle; apparently few floor refinishers like to do it, because of the thinness of the wood and the complexity of sanding, refinishing parquet in particular can be especially challenging. But well worth the effort if you can swing it, as you’ll see.

Floor refinishing, especially if your whole house or most of your house is affected, means you have to pack up all your shit and effectively move out for the amount of time it takes to do the work. Until the floors have cured enough that you can walk on them, and the fumes have dissipated enough that you won’t suffer brain damage just by breathing (don’t drink polyurethane, folks), you’ll need to take up residence elsewhere.

In other words, this shit is not for the faint of heart. It is without a doubt the biggest, messiest, most disruptive project to do. Which is why most people opt to refinish floors before they move in. 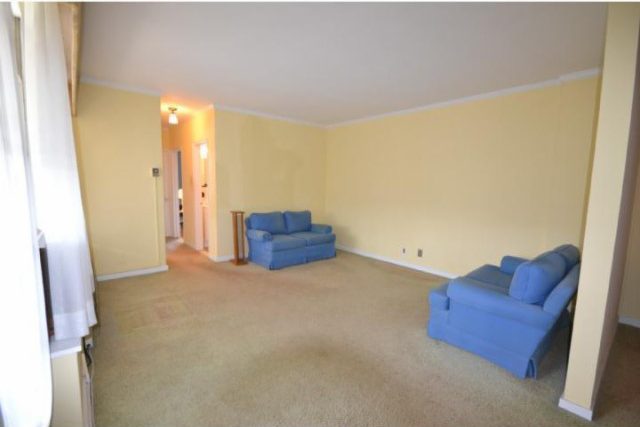 mental hospital yellow. you can see where our realtor edited out the wall crack. keepin’ it classy. 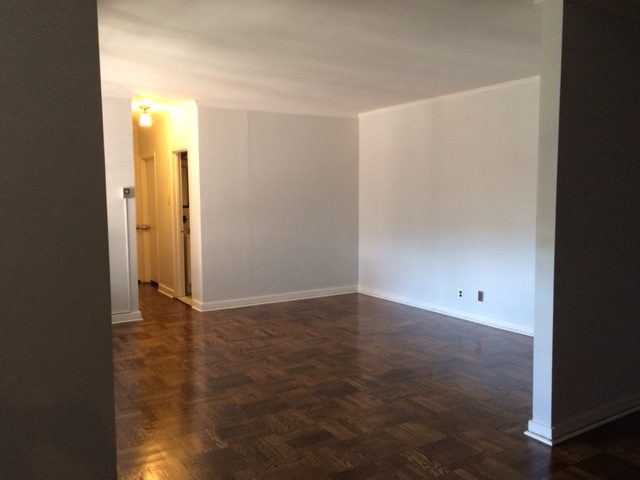 We chose to live with the carpet for a while, since we weren’t entirely sure what we wanted to do with the floors, and the parquet in the bedrooms was … shall we say, less than thrilling. 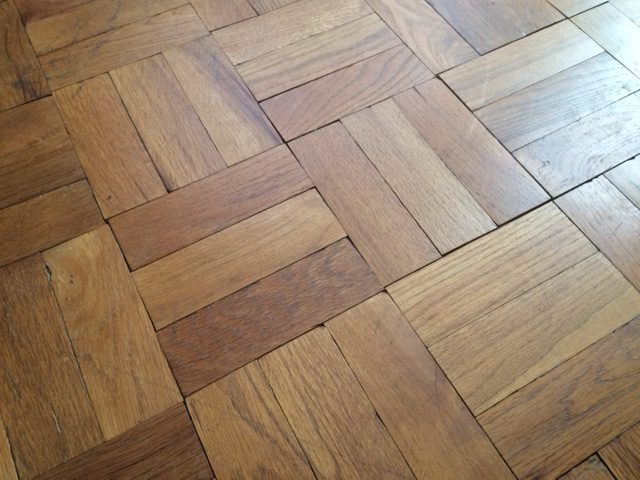 thought it wasn’t terrible, it definitely needed some work 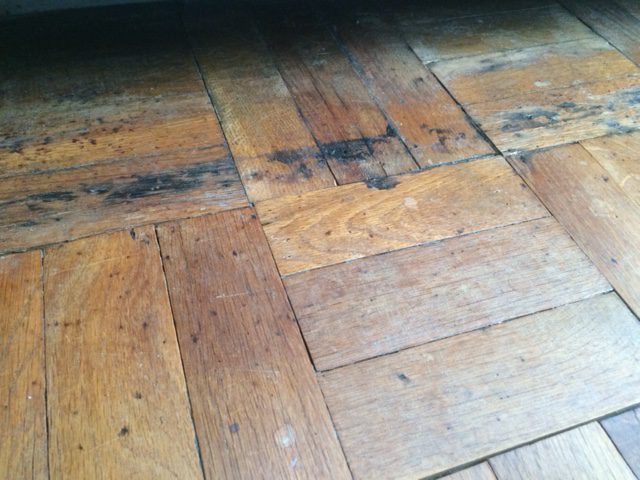 Full disclosure, the pictures above are why I held a low opinion of parquet. Like, thought it was hideous and awful. To the point that for a while, we were considering ripping out all of it and replacing it with laminate. Gasp! I know, hate the person I was, not the person I am now.

Refinishing parquet in a darker stain makes for a more modern and dramatic floor. Did I seriously write that? A “dramatic floor?” I clearly don’t have enough going on in my life. 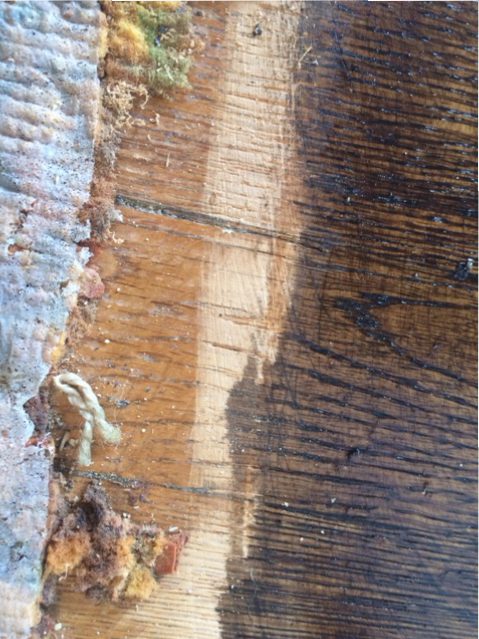 it’s hard to tell in the original pictures, but the floors were ORANGE. orange floors, yellow walls. what the fuck, 70’s?

The stain we went with was Minwax Dark Walnut, and it looks beautiful on our parquet. It picks up the grain of the wood, and changes color in different lighting. It has a rich undertone that works really beautifully in the contrasting wood tiles, and glows a deep honey color in the sunlight. It’s pretty fucking great. Picking a stain for your floor is stressful. If your floor guys are like my floor guys, they show you a tiny swatch and you try to use your imagination and imagine a sea of it. So hopefully these pictures will help you out if you’re trying to determine if refinishing parquet floors is something you want to consider.

Now that I’m on the other side of it, I can say it was well worth it, because I haven’t told you about the horrors yet. It’s sort of like the first time mom who’s all stoned on pain killers and endorphins looking at her little bologna loaf and saying how she’d do it again in a second. She’s not telling you about the vaginal tearing. She’s lying to you by omission. I mean, yes, the end result is awesome, but there are some important details you need to know before you commit.

1. Your life is going to be upside down for a while. At least a week. Possibly three or more, if something goes wrong.

You need forgiving people who are willing to put you up off and on as needed, otherwise hotels will be expensive and depressing. We decided to split the project into two parts over two weeks: bedrooms first, then hallway and main living / dining area. This wasn’t a bad plan, as it ensured we wouldn’t have to actually move any of our stuff out of the house, so much as just have it on a kind of furniture rotation. 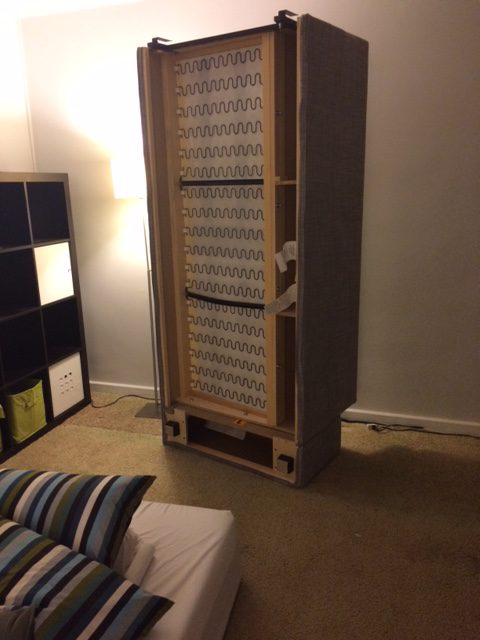 All our shit is IKEA, though, so really, it was just an exercise in following pictogram instructions in reverse, and lifting. DO YOU EVEN LIFT, BRO?

Best laid plans and all that. So we hired a highly recommended guy who really impressed us as both a professional (he actually returned our calls…) and extremely detail oriented.

He never made it to the job site to actually do the work, though, because he wound up in the hospital (he’s ok now). At that point, we’d already booked hotels, taken off work, and there was no postponing or backing out. He sent out two crews to do the job, and all was well. Aside from a dude being in the hospital, of course. So in the grand scheme of things, not terrible.

Well, except then when we did the main floor area (two parts, remember?) the finish was very, very different from the bedrooms. I’d neglected to confirm the finish when they came back, even though I’d remembered to confirm when they were doing the bedrooms. If you take one thing away from this, always make sure you and your crew(s) are on the same page, especially if the boss is in the hospital. 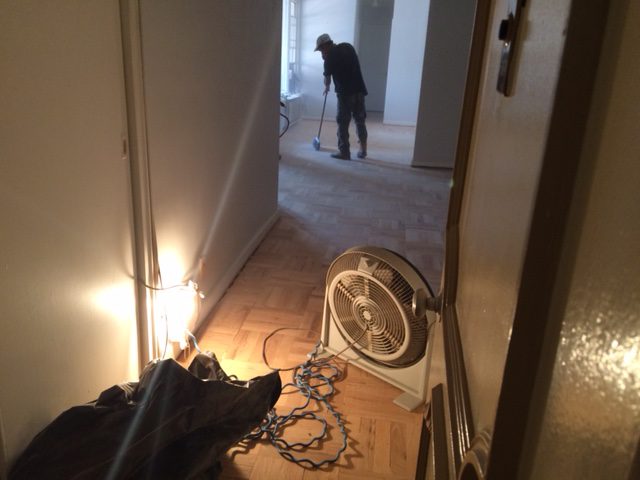 Right now is where I should have said, “hey, we’re doing a satin finish, right?”

We’d opted for a satin finish throughout. The bedrooms were indeed satin, but the main living area and hallway looked like a bowling alley. Aside from the blatant, jarring mismatch, parquet looks like shit in high gloss in my opinion. You see every variation, every imperfection, every single thing. The satin finish makes everything much more even and uniform looking. Satin is also MUCH easier to care for. It doesn’t show dust and scratches nearly as much as a gloss does. Also, though it’s entirely possible this is bullshit, we feel in our hearts that the fumes from the satin finish are a lot less intense than the gloss finish. 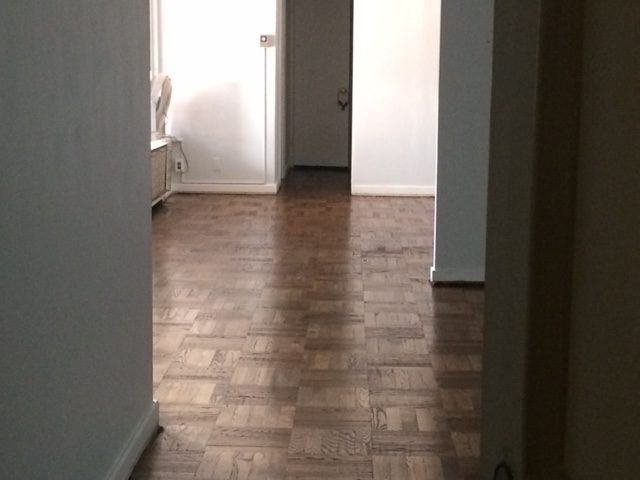 Wow. Many parquet. Much shine.

Ok, so this was after the first coat of poly, but not the final coat. I apparently didn’t take a single picture of the super shiny shit. I’m 99% sure that’s the level of denial I was in. Still a good illustration of the difference, though. 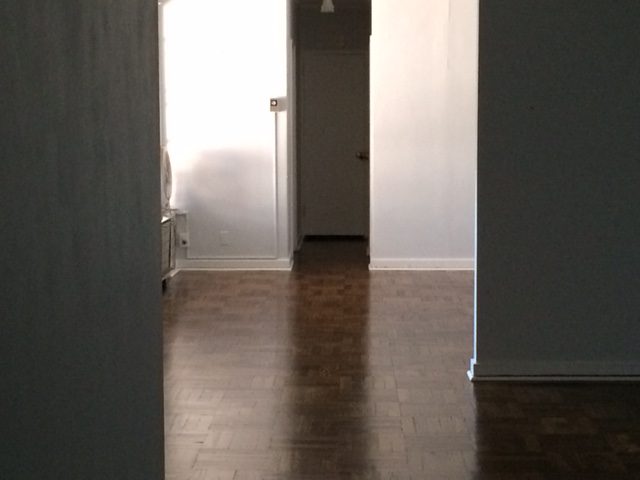 Trying to get the exact same shot is hard, you guys. But you can really see the difference the finish makes. Refinishing parquet with a satin sheen results in a much softer and more uniform finish, while still clearly being parquet, y’know?

So there may have been a melt down.

We rallied, called the floor guys back, and they came first thing the following Monday to fix it. Which we weren’t quite expecting. We figured they’d come and look, but did not fully anticipate that they’d immediately start unloading equipment to fix it (though I am certainly not complaining). So we had another rallying moment where we threw a bunch of stuff in a suitcase, made a few calls, boarded the pets (they in turn had a tiny melt down when they realized they were going back to the pet hotel), and got it done.

3. You will move all of your belongings at least twice.

Which is awesome if you enjoy moving furniture as your cardio, but for the rest of us it’s not what anyone would describe as “fun.”

If you’re a minimalist and doing your floors in sections and live on one floor, this isn’t that big of a deal. If you’ve got a lot of shit, live on multiple levels, and are doing them all at once, you’re gonna need to get a U-Haul and rent storage space for a week or two. And buy a lot of boxes. All the pain and suffering of moving without actually changing your address.

4. Everything, and I mean everything, is going to get coated in a fine layer of sawdust.

I swear, we will be finding sawdust in random places for the next ten years. Protect everything that you can. Tarp / plastic sheet stuff as much as possible. Accept that your efforts are futile and ultimately life is meaningless.

5. If you live in an area that has a monsoon season, plan to refinish your floors during any other time of year, except when it’s below 75°F.

Which for us is the 32nd of Never, because I think we get maybe one day out of the year that meets both of those criteria. Between the stifling swamp-like humidity and random thunderstorms or the bizarre global warming blizzards, we’re kind of at the other end of the graph for optimal weather conditions for floor refinishing. If you do opt to have your floors redone during winter or a season that has lower humidity (good for you, what an astute planner you must be, I’m sure your life is fucking awesome), be prepared to open every single window and crank up your heat to compensate.

We took a huge gamble that the carpet removal would go smoothly, the floor underneath it would not only be parquet, but in good enough condition to make it worth refinishing, and that there wouldn’t be any significant or costly repairs. Miraculously, the biggest issue was just a hiccup in the finish, which was a moderately easy to fix problem. All in all, it looks way better than I dared to hope when we started out on this. We don’t have hideous carpet anymore, we have a consistent finish throughout the entire space, the stain looks great. I actually like parquet now.

After a year, do I still think this was worth it? Would I consider refinishing parquet floors again in the future? Yes! I’m incredibly happy with the results and would absolutely do it again in a heartbeat. Well, maybe not a heartbeat. Maybe in a drunken stupor after a week in Cabo, or prior to moving into a new house. But yes, the result is absolutely worth the effort, though that effort is considerable.

My biggest issue with parquet is how dated it looks with the orange stain that’s so prevalent. Parquet itself is a great way to get wood floors without spending a ton of money. And with the right stain, it can add a lot of warmth and character to your home. The parquet pattern has so much depth to it compared to strip or plank flooring.