You may remember from my previous post, “Our Bathroom is a Tiny Closet,” where I explained the challenges I face with a 5×7′ bathroom. We’ve come a long way since then, and our bathroom renovation is officially complete. Well, mostly.

We’ve put a lot of thought and effort and a modest amount of capital into turning this thing from kind of a nightmare into what my husband now calls “God’s bathroom.” While he’s really referring to the powerfully bright (we made a mistake with the wattage) LED lightbulbs that are in there now, it is quite the transformation. Let’s take a look. 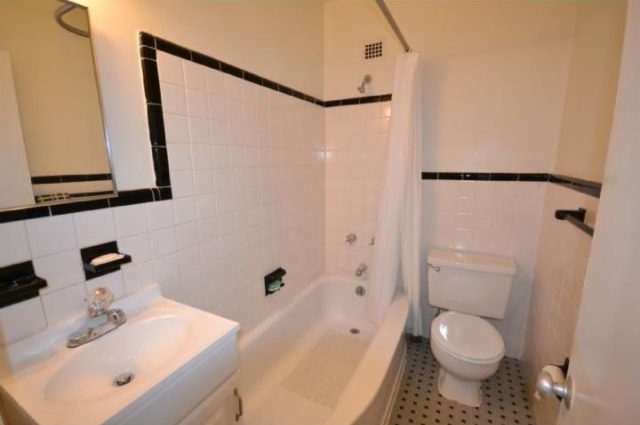 This is what it looked like when we moved in. Not terrible, but not great. Certainly serviceable, though. Things of note: 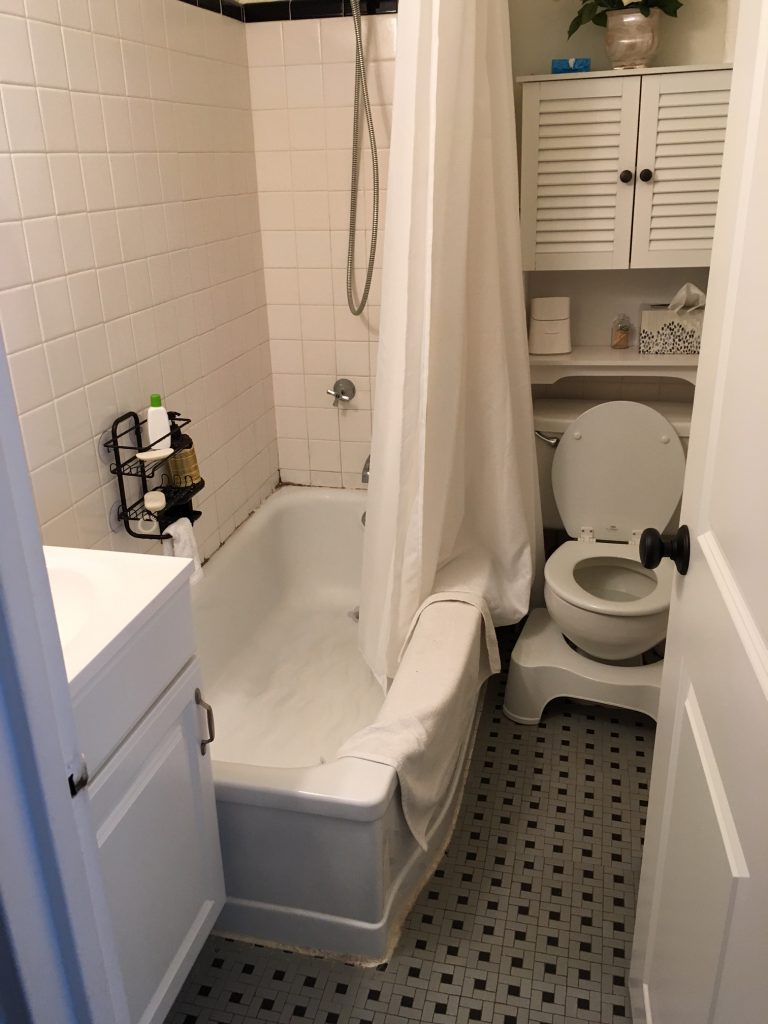 This is what it looked like pretty shortly thereafter. You can much more clearly see the funky caulk around the base of the tub, and the nightmare around the tub surround. The good news is that we replaced those slab doors. And I absolutely signed up for the black hardware. I know in my heart it’s going to become “remember those ridiculous home design trends from the 2010s? All the granite and white kitchens and black door hardware? What was that even about?” Whatever, I like it. Suck it.

You can also see my tendency towards whites. For a walking hot mess like me, it’s pretty batshit that I like white linens as much as I do. I should like black. Or impervious space material.

Years from now when people wonder where I went wrong, I can point to this picture and go, “this. This right here is where I began my descent into madness.” 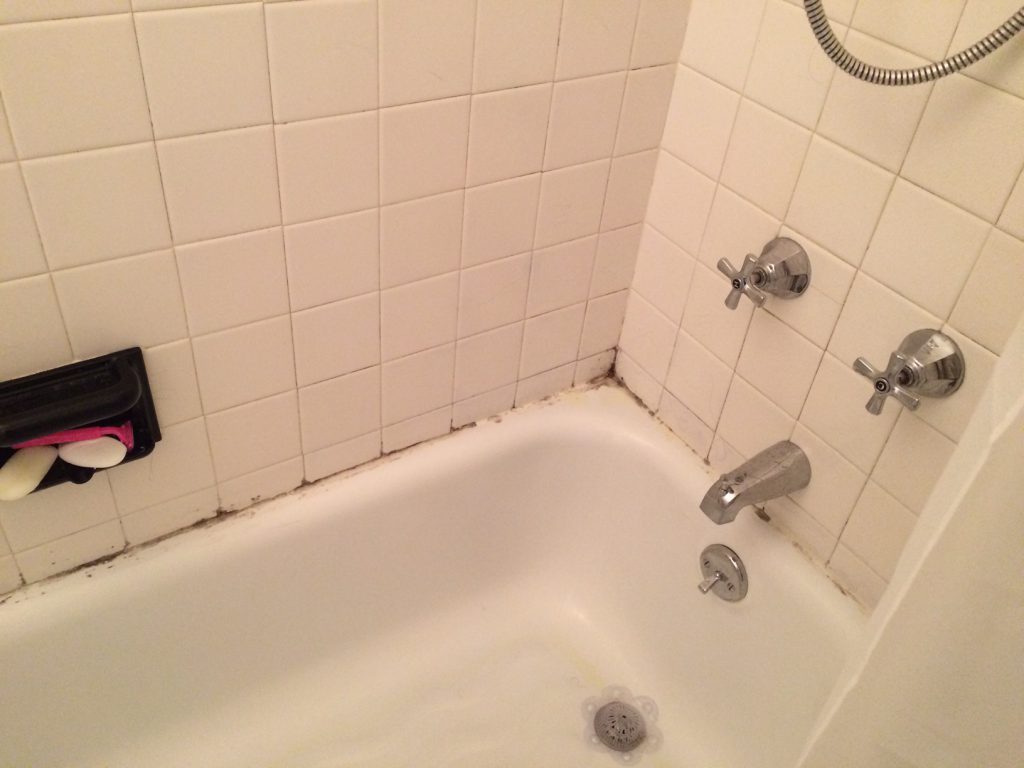 In case the previous photo wasn’t graphically disgusting enough for you. On the bright side, that hair strainer dealy looks pretty alright. Grossed out enough? Ok, let’s check out the after picture. 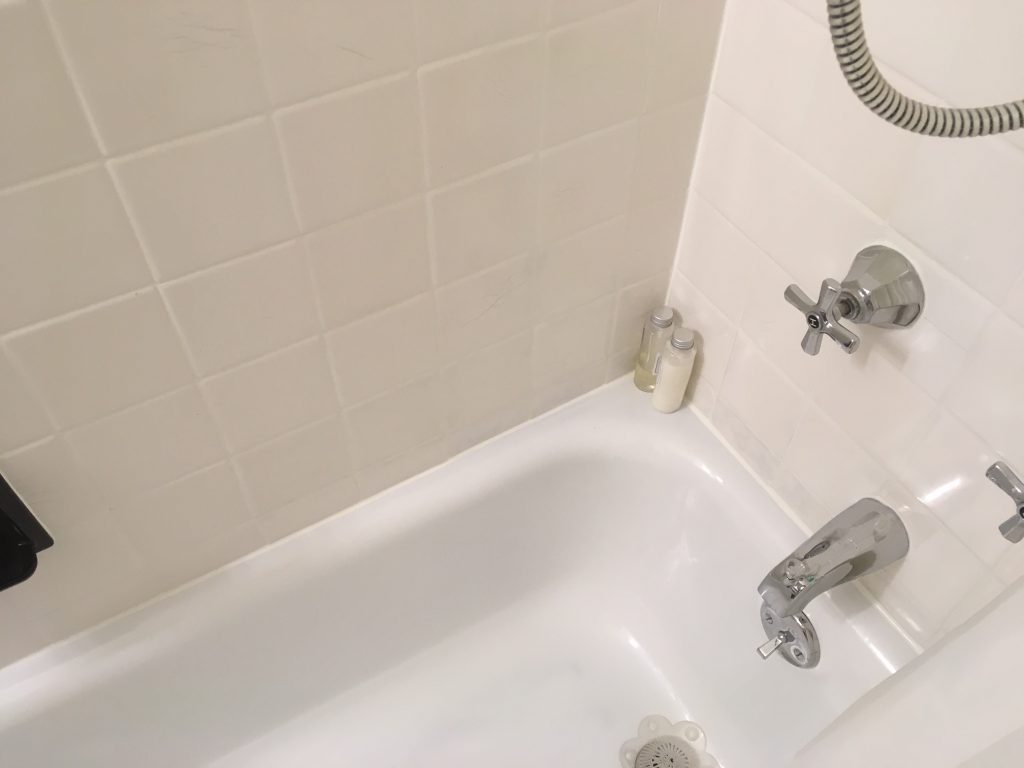 I paid a very nice man to spend the better part of 12 hours in my 5×7 bathroom to do all of this. There’s no magical reveal here. I didn’t use some perfect concoction of white vinegar and new age bullshit to get this. I paid someone to recaulk and regrout my entire bathroom. And he was worth every goddamn penny. I feel like I should have paid him more.

Why yes, astute reader, those are travel-sized toiletry bottles in the corner. I’ll chronicle that particular flight of whimsy in another post. 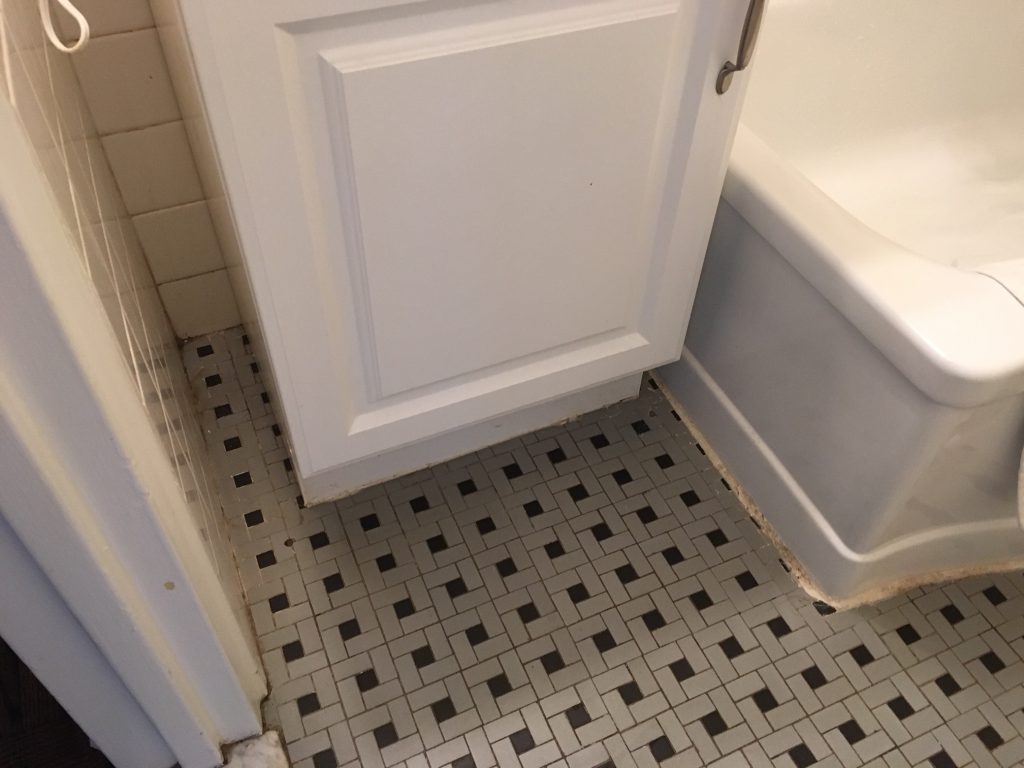 First, we have to talk about the vanity again. LOOK AT IT. Do you know how often toothbrushes got lost down there? Contact lenses? Anything that could fall down there did and had to be fished out with a broom handle, or if the cat was feeling particularly helpful (actually, he was feeling like a little shit, but thought he would piss me off by fucking around with stuff in there and was surprised and annoyed when I praised him). 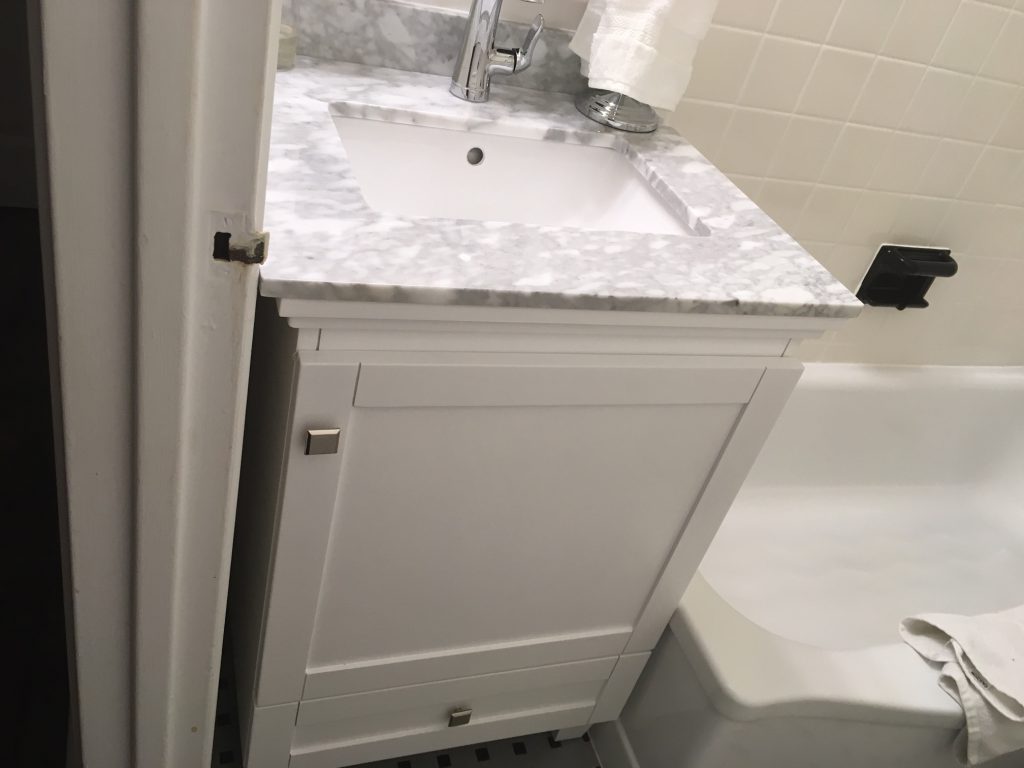 This is the new vanity. Notice what there aren’t any more of. I’m sorry, maybe you need another angle. 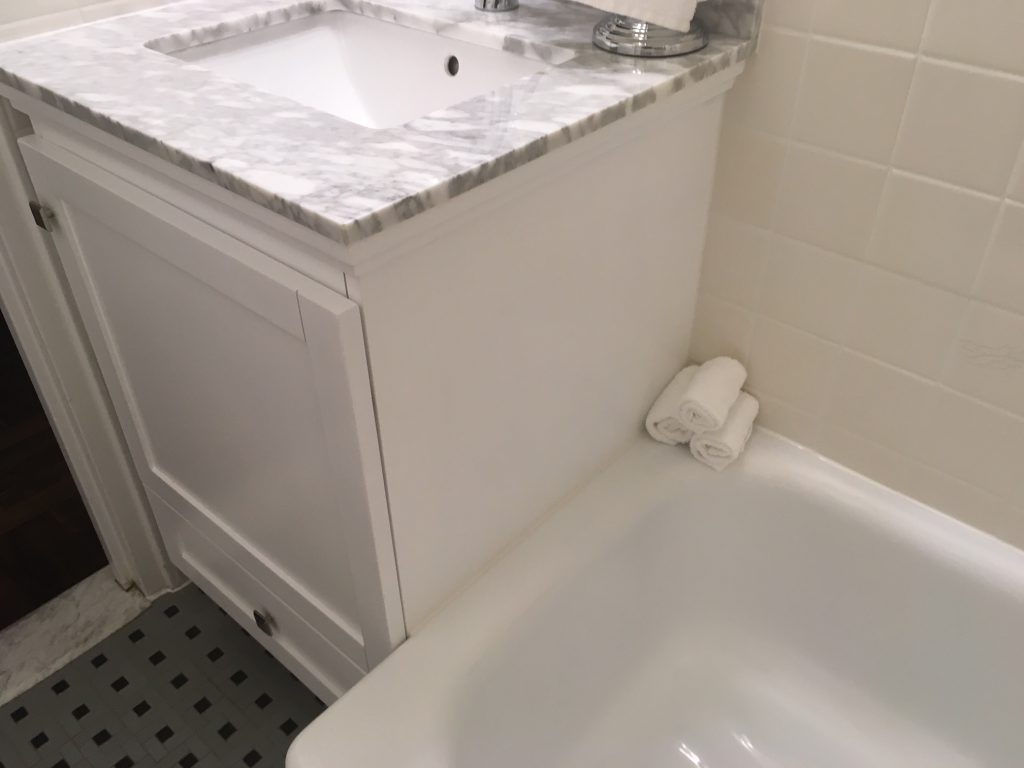 Yeah, there are a CHRONIC LACK OF GAPS FOR SHIT TO FALL INTO. Also, spa washcloth rolls. Whatever, you don’t live here, you don’t get to judge me. This thing is amazing. And it holds so much shit.

You don’t even know. So much shit. Mostly feminine hygiene products to embarrass people who snoop. But still. STILL.

I will remember you… dun na na naa na 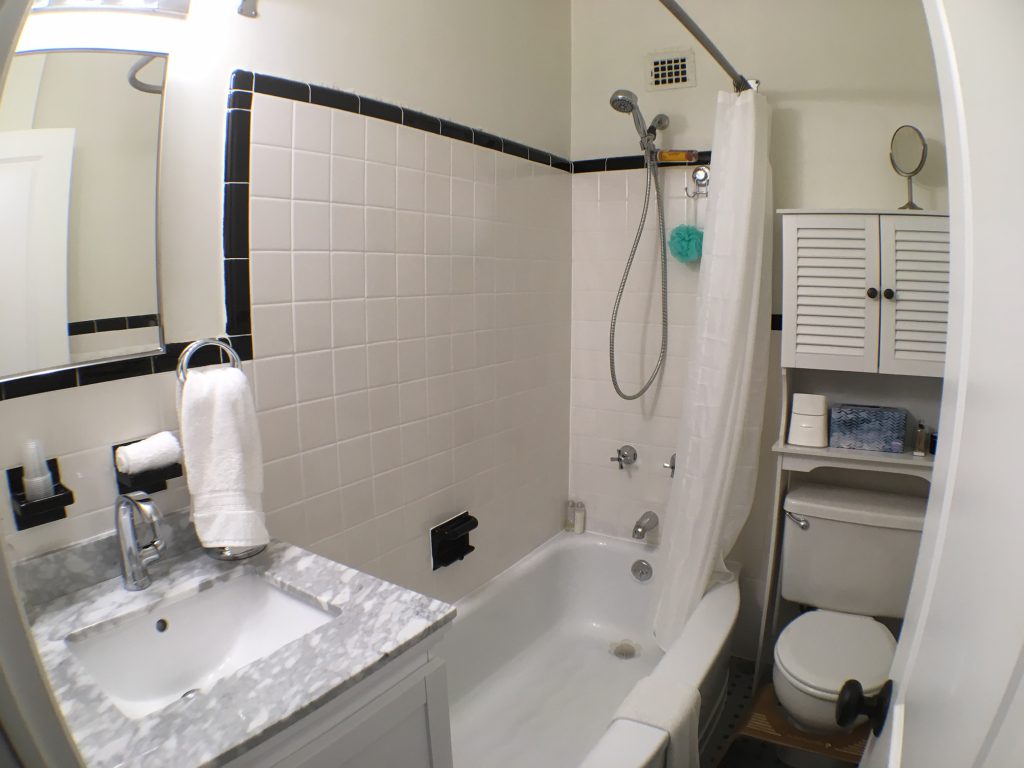 We’ll cover how I get and keep my whites so incredibly, blindingly white (irrespective of the aforementioned wattage situation) in another post. But here you go. Some delightful before and afters. You’re not gonna go wrong with getting your bathroom sorted by a pro. It’s a world of difference. Also, the super fancy marble-topped vanity hurts nothing.

Our Bathroom is a Tiny Closet